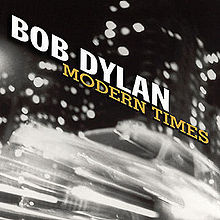 Bob Dylan wrote “Ain’t Talking” for the 2006 album “Modern Times”. Some of the songs on this album prove that Dylan has entered a new phase in his artistic development.  A phase of which Dylan said he had to go through. These songs had to come out. This phase can best be described as “The Old Testament Revisited”. This is particularly apparent from lines which intend to send out a message with a high degree of physical violence, a violence which is so common in the Old Testament. Dylan wants to connect the Old Testament with the New, with the “Modern Times”, he wants to show that although ‘the times they are a changing’, the battle is in essence still the same, only the weaponry has changed. In Modern Times it is, as Dylan wrote elsewhere,  ‘a spiritual warfare flesh and blood breaking down’, but if  Modern Times more and more slide back into the Dark Ages, and more and more people start to ‘wonder what’s the matter with this cruel world today’, the old physical weaponry of the Old Testament comes back into use. This may sound a little ‘mysterious and vague’ but we hope to clarify this in the analysis of the verses of the song.
In some sort of a way “Ain’t Talking” is reminiscent of “"Highlands", the final song of the album “Time out of Mind”.  In both songs a lone pilgrim is on his way to his destination. In "Highlands" however, the pilgrim more or less reaches his destination –“I’m already there in my mind” – “Highlands” concludes, but in “Ain’t Talking” no specific destination is defined, the narrator zooms out and slowly disappears, “in the last outback, at the world's end”. At the same time it does not mean – like Chris Gregory in his analysis of this song claims – that the narrator has lost all hope of redemption. On the contrary, no matter how dark and desolate a landscape is portrayed in the song, there are indeed “no altars on this long and lonesome road”, yet the poet throws himself in the merciful hands of God: “who says I can’t get heavenly aid”, he snarls at all those who think he has lost all rays of hope. Let’s have a closer look at the verses to see how this is worked out.

“Ain't talkin', just walkin', through this weary world of woe, Heart burnin', still yearnin',
No one on earth would ever know” The chorus lines …Ain’t talkin, just walkin’… and ….Heart burnin’/ still yearnin’… are taken from the Stanley Brothers’ bluegrass gospel song “Highway Of Regret”. Driven away from the mystic Garden of Eden (Genesis 3:24), man indeed enters the untrodden path of the Highway of Regret and remorse. From now on man has to walk that lonesome valley: so lonely that “no one on earth would ever know” God’s judgment is relentless:  “Ain’t talking”, no time for idle conversation, excuses won’t help: “there‘ll be no mercy for you once you have lost”. Expelled from the Garden of Eden, man has to keep on walking – “just walking”, no more talking, all communication lines cut - and has to deal with the ‘thorns and thistles’ the earth brings forth and ‘in the sweat of his face, he shall eat bread’ (Genesis 3:18,19). Such a world is indeed a “weary world of woe”.  But yet there is hope for man. There is a promise from God that in the end – if man keeps on walking through the fires of time- the seed of the woman shall bruise the head of the serpent. (Genesis 3:15). “Heart burnin', still yearnin'”, redemption is promised, the Spirit of the Lord is not entirely withdrawn from man, his heart still burns, still longs and reaches out to the future day of salvation, it keeps him going: “just walking”.

“They say prayer has the power to heal, so pray from the mother” James 5:15 says that ‘the prayer of faith will save the sick man, and the Lord will raise him up”. Prayer has indeed a healing power. Why does the poet say: “so pray from the mother”? Some hear the lyrics as: “So pray for me mother”, but that does not make much difference. The poet requests a sort of mediator to pray for him. 1 Timothy 2:5 calls Jesus Christ the only mediator between God and man. The Roman Catholic Church however, sees Mother Mary, Mary the Virgin, the mother of Christ, as mediator between man and Christ. ”Pray from the mother” could then mean: “pray for me to Mother Mary, that she may plead my case to Jesus”. However, somehow I have a feeling that this is not what the poet intends to say. It does not fit in the Old Testamentary atmosphere of the song. More likely is the interpretation which says that the lyrics read: “pray for mother”.  Somewhere I read that Jewish tradition ordains that whenever the Torah is read we are granted a special and uniquely opportune moment to invoke blessing for those in need of divine intervention. From time immemorial it has therefore been the custom to recite a "Mi Sheberach" (prayer for the sick) on behalf of people who are ill.  During the Torah reading, a special "Mi Sheberach" blessing is said. The blessing begins with a prayer for the mother's health.
“In the human heart an evil spirit can dwell”. King Saul was once terrorized by an evil spirit from the Lord (I Samuel 16:14). Jesus had to fight a lot of evil spirits when he was on earth. Jesus says in Mark 9:29 that an evil spirit can only be driven out by prayer. Although in every human heart an evil spirit may dwell, the healing power of prayer is so strong that an evil spirit is no match for a faithful prayer.
“I'm trying to love my neighbor and do good unto others, but oh, mother, things ain't going well”. “To love my neighbor and do good to others” is obviously taken from the teachings of Jesus who talks in Matthew 22:36-40 about the greatest commandment in the law of God: “You shall love the Lord your God with all your heart, and with all your soul, and with all your mind. This is the great and first commandment. And a second is like it, You shall love your neighbor as yourself. On these two commandments depend all the law and the prophets”. This commandment refers back to the Torah. The poet is honest about himself. He tries to love his neighbor and do good to others but he finds out that he fails. When he looks in the mirror of the law of God, in the broken mirror of innocence, he finds out that he is in a desperate state; he is in need of redemption. He needs the guidance and the Spirit from above to keep him going.
Will be continued……. Please feel free to respond.

A country dance was being held in the garden
I felt a bump and heard an 'Oh, beg your pardon
Suddenly I saw polka dots and moonbeams
All around a pug-nosed dream
(Frank Sinatra: Polka Dots And Moonbeams ~
Burke/Van Heusen)

Excuse me, ma'am I beg your pardon
There's no one here, the gardener is gone

There seems to be a connection here to John 20:14-16.  In this passage a distraught Mary Magdalene is standing outside the empty tomb and is confronted by the risen Christ.  She mistakes him for the gardener.  John 19:41 clearly tells us that there was a garden at the place where Christ was buried.  In fact there seems to be a subtle Passion theme that resonates throughout this entire song i.e. walking in the garden at night (Gethsemane?), being struck from behind (the betrayal by Judas and subsequent arrest of Christ), all worn down by weeping (compare Luke 22:44), making the most of one last extra hour (hints at Matthew 26:40 where Christ says to his disciples “So you could not keep watch with Me for one hour?”), much loved companions (his disciples?), “carrying a dead mans shield” (the Cross?), “walkin’ with a toothache in my heel” (could refer to the serpent of Gen.3:15, “he will crush your head, and you will strike his heel”).

Ignore the negative comments.  To suggest the song is not steeped in religious imagery is patently absurd.  Not that we can definitively know what Bob thinks, but the fact the poet borrows from other authors does not mean he is not attaching MEANING to the words.  Would we say Shakespeare means nothing in all his plays where he borrows from Plutarch or Holinshed?  Of course not.  Neither would we say Shakespeare, or Bob, MEAN nothing by their frequent allusions to the Bible.  Clearly, it means something.  Whether we can know, definitively, is another question, but I think only a fool would say you are on the wrong track.

My suggestion would be to look again at what you mean by Old Testament vs New Testament.  If you are right that the song is primarily and ode to the Old Testament, it should not really have anything to do with Jesus.  By this I mean the "tone" of the Torah does not fit perfectly with that of the Gospels, and I think Bob certainly senses this tension.  So I think you will want to think about exactly what you MEAN by "Old Testament" mood of the piece in relation to your comments about the presence of Christ in the song.  It could be (and probably is) that Bob defies typical religious association or denominations, and is therefore able to blend in Old Testament imagery with the inclusion of the Redeemer, but this would change considerably what you mean by Old Testament.

I think your observations and analysis are spot on, especially enjoyed the connection to the cursed ground from Genesis. I absolutely believe his Biblical references are intentional and his intention is to communicate spiritual truths to the ears that can hear

This is plain absurd.  Everybody knows the first few lines are "borrowed" from another poet, so pretending Bob gave such meaning to "the wounded flowers were dangling from the vines ...I was passing by yon cool and crystal fountain" is plain nonsense.
This song is plain and simple about the feelings of soldiers in Afghanistan and Irak.  As usual, Bob remains vague, describing the feelings of a warrior, who could be american or terrorist or partisan.  Revenge, no mercy, and the harsh realities of war are simply expressed and described.  He evokes the comraderie and understanding between soldiers of a same camp (share my code) and his only religious reference is that "the gardener is gone", evoking the same idea found is "with god on our side" - i.e. God would not allow such cruely.  Get real.  Listen to what he says and not to what you want him to say.   And this comes from a priest by birth (a Cohen).

Quite frankly I think you put way to much religious hoopla into Dylan's lyrics. Bob may be a spiritual man but he is not this religious fanatic you make him out to be. The old testament is just that old, a fairy tale of sorts, the majority of it's writings have little to no value in these "Modern Times."
I'm sorry but Bob is not stuck in the Bible, his writings surpassed that years ago. God bless, any belief is better than no belief.