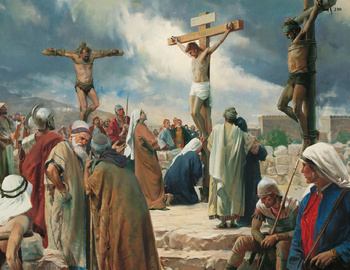 Bob Dylan's "All along the Watchtower" - a lyric analysis - Part 2

We now come to the final verse which, as we said above, should actually be the first verse. It was Dave Van Ronk, a fan and mentor of Dylan at the time, who remarked that the “Along” of “All along the watchtower”, is simply a mistake. A watchtower is not a road or a wall, and you can't go along it. In van Ronk’s eyes it was a poetic liberty Dylan thought he could get away with. Probably the words “All along” were inserted for rhythm purposes or to focus not on what happened on the watchtower but on what happened alongside the watchtower, the activities surrounding the watchtower.  We also remarked above that he whole of the discussion between the joker and the thief on the cross is marked by this verse. This verse “All along the watchtower, princes kept the view…etc. “reflects the Book of Isaiah Chapter 21: 5-9 which reads:
“Prepare the table, watch in the watchtower, eat, drink: arise, ye princes, and anoint the shield. For thus hath the Lord said unto me, Go, set a watchman, let him declare what he seeth. And he saw a chariot with a couple of horsemen, a chariot of asses, and a chariot of camels; and he hearkened diligently with much heed: And he cried, A lion: My lord, I stand continually upon the watchtower in the daytime, and I am set in my ward whole nights: And, behold, here cometh a chariot of men, with a couple of horsemen. And he answered and said, Babylon is fallen, is fallen; and all the graven images of her gods he hath broken unto the ground”.
This prophecy of the great Prophet Isaiah (740-639 BC) focusses on the fall of the great Neo-Babylonian Empire. A typical phenomenon of the prophecy of the Old Testament is that a prophecy may have multiple fulfillments throughout the history of this world, even without the prophet necessarily being aware of these multiple fulfillments. The first fulfillment of Isaiah’s prophecy took place when the great Neo-Babylonian Empire fell in 539 BC. We see a next fulfillment - in fact the biggest and the ultimate fulfillment- when Jesus died on the cross and by doing so, Jesus did what is written in Colossians 2:15: “He disarmed the spiritual rulers and authorities”,’ in fact Jesus defeated the spiritual empire of Babylon on the cross. We see a next fulfillment of the prophecy of the fall of Babylon  represented in the fall of the Roman Empire and we sees a final fall of Babylon on the Latter Day, the fall of the great superpowers, the great Babylon as described in Revelation 18. The prophecy sees all these events as sequences, following one another in intervals, rather than as events next to one another as on a picture. This enhances the timelessness of the scene. Babylon stands for the all the powers which oppose the coming Kingdom of God. What strikes us in the prophecy of Isaiah is the great activity surrounding the watchtower – this may be the reason why the song says “all along” the watchtower. Isaiah sees a lot of stir and bustle: “a chariot with a couple of horsemen, a chariot of asses, a chariot of camels, a chariot of men, with a couple of horsemen”.  Dylan pictures the same activity, the same stir and bustle when he writes: “princes kept the view. While all the women came and went, barefoot servants, too”. In some sort of a way whenever a big catastrophe, a world shaking event, is about to occur we see the highest state of alert in heaven and on earth, a whirlpool of activity. (Revelation 8:5; 11:13). We see the same stir and hustle around the cross: “all the women (John 19:25) came and went barefoot servants too”. Barefoot servants may represent the messengers of God, the prophets, the apostles, who gave up everything they owned to serve the LORD: “How beautiful are the feet of those who preach good news” (Romans 10:15, even if these servants are poor and have to go barefooted. A barefooted servant may also be a messenger who publicly mourns for the sins of the people, like king David once did when he publicly mourned and wept for his own sins (2 Samuel 15:30). As we read in Revelation 18, the fall of the spiritual empire of Babylon is reason for ‘weep and wail’ (Revelation 18:9, 17).
“Outside in the distance a wildcat did growl, two riders were approaching, the wind began to howl. In this final line the omen that something ominous is about to happen is getting stronger, as if we’re just past the stillness in the winds before the hurricane begins. We have the idea that “the last part of the day is already gone” and that “it’s way past midnight”.
“Outside in the distance a wildcat did growl” may be a contemporary way of saying what is written in 1 Peter 5:8: “Be sober, be watchful – that is: stay on the watchtower – Your adversary, the devil prowls around like a roaring lion, seeking someone to devour”.
“Two riders were approaching, the wind began to howl. The two riders may be the two riders of Isaiah 21:7; they may be in a figurative sense the joker and the thief, approaching your life house, urging you to make a decision: “which side are you on? “or  the two riders may be, also in a figurative sense, the last two witnesses of Revelation 11.This final line warns us: “whatever you wish to keep, you’d better grab it fast” because the hour is getting late, the hour is near.

In part 1 of this analysis we raised the question why this song is so important for Dylan. Does Dylan see himself as some sort of a prophet like Ezekiel? Ezekiel received orders from the LORD:  “Now, son of man, I am making you a watchman for the people of Israel. Therefore, listen to what I say and warn them for me”.  (Ezekiel 33:7)
During his 1979/1980 gospel tour we hear Dylan say in a stage rap: “Years ago they ... said I was a prophet. I used to say, "No I'm not a prophet" they say "Yes you are, you're a prophet." I said, "No it's not me." They used to say "You sure are a prophet." They used to convince me I was a prophet. Now I come out and say Jesus Christ is the answer. They say, "Bob Dylan's no prophet." They just can't handle it”. In his 2004 CBS interview Dylan says that people use to say to him: "'You're the prophet. You're the savior.' I never wanted to be a prophet or savior. Elvis maybe. I could easily see myself becoming him. But prophet? No.".
We conclude that it is true that Dylan never regarded himself as a prophet with a capital “P”, speaking with divine authority like the biblical prophets. In I Corinthians 14, however, it says that all Christians may be in sense prophets, but they are prophets with a small “p” and Dylan is certainly one of them. And that is why this song is so important to him.
As always, please feel free to respond to this article.....

IMHO - These are just metaphors used to describe Dylans feelings toward fame at that time in his life...the whole of JWH is IMHO mainly autobiographical - thats how I hear it anyway, so what if he uses biblical imagery?the guy was starting out on writers block , the Wibble was probably a useful tool

While it is well documented that Dylan had a large volume of the KJV open at Isaiah at the time of penning JWH, 21:7 does not state two riders. While JWH may have been the 'first biblical rock album', this was no evangelical Dylan. He was not preaching the gospel. Not all Dylan lyrics are about evangelism. Your approach and that of others like you is that you seem to have no interest in Dylan's wider reading: T S Eliot for example: In the room the women come and go Talking of Michelangelo. Ironically, your treatment of the joker carves out your interpretative features in the same smoky twilight as that of the Wanted Man brigade who tried to link the joker with the Jokerman, between two thieves, so as to perpetrate their Jesus-the-Jokerman agenda: Nick de Somogyi, ransacked by Michael Gray in his hilarious chapter on Jokerman. As for Dylan's disingenuous denial of having the attitude of a prophet, 'come gather round people' - and read R E Prindle on Exhuming Lubavitcher Bob.

analysing any song using biblical quotes doesn't make sense : who will analyse these quotes ? Instead of offering solutions the result is even darker than the song itself.

lyrics carry the melody, melody needs words to be carried. All you really can say about this song is, that the composer succeeded in using the lawsof the greek tragedies : unity in time, space and action.

My understanding is that the Joker in the Tarot refers to the Fool, not to Jesus.  The idea that this song is about a conversation between people being crucified does not fit my perception. It strikes me as imposing something on the song that is not in it.