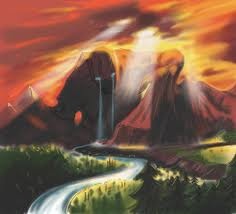 In this article we take a closer look at the third stanza of this song and we try to solve the ‘Sodom and Gomorrah’ issue.

“You're a man of the mountain, you can walk on the clouds, manipulator of crowds, you're a dream twister. You're going to Sodom and Gomorrah, but what do you care?  Ain't nobody there would want marry your sister, friend to the martyr, a friend to the woman of shame, you look into the fiery furnace, see the rich man without any name”.

There's biblical references for sure, but above there's too much detail imposed to make Dylan's figurative diction fit exactly into a biblical framework .... Jokerman???

Often he mixes in other images like the snakes that might refer to Hercules or Artemis....if he wanted things completely clear, he'd make them so....lots of leeway for interpretation without having to know the Bible inside and out...biblical theologians even disagree as to what's being said in the Holy Book or what the correct translation should be.

Thanks for
your response to my weblog. It is a  very good question you raise. My
reply is that the Bible seems to suggest that the entire population was gay.

ōBut
before they retired for the night, all the men of Sodom, young and old,
came from all over the city and surrounded the house. They shouted to Lot,
ōWhere are the men who came to spend the night with you? Bring them out to us
so we can have sex with them!ö(NLT)

So all men in Sodom were involved. That does not mean that each one of
them, each individual was gay, but that the overall population was gay. That
may be the reason why Lot offered his daughters, hoping that it would distract
the attention of the mob away from the two men, but in vainģ..

Perhaps another take on the lines could have been:
You're a man of the mountain, you can walk on the clouds, manipulator of crowds, you lead them to the slaughter.You're going to Sodom and Gomorrah, but what do you care?  Ain't nobody there would want marry your daughter.

Slight contradiction here: if you're saying that the entire population of Sodom and Gomorrah was gay (and hence explains the "not marry your sister" line), then why on earth did Lot give his 2 daughters away to these men of Sodom and Gommorah?