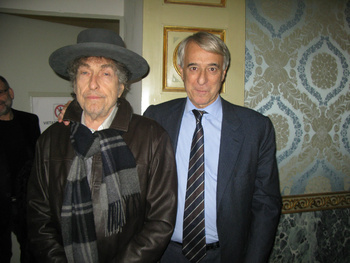 “Roll on John” is another masterpiece from the album ‘Tempest’ which I really love. The song has a melancholy melody, it chimes and despairs, the music lingers on as we are slowly drifting from scene to scene and Dylan’s voice is really heartfelt.  When I heard the song for the first time, the lyrics somehow disappointed me. My first thought was that, no matter how great an artist John Lennon may have been and no matter how much I like his music, so much praise and eulogy for a mortal human being sounded over the top and initially the song felt to me as if there were some sort of misplaced idolatry in it. Also at first glance, the praise and eulogy addressed towards Lennon in the lyrics of the song, somehow seems to suggest that Dylan and Lennon were close friends, if not soul mates or bosom buddies. But they weren’t. They certainly respected each other and the relationship they had, can best be described as good acquaintances, rather than as close friends. It gave me the first clue that there must be more to it and when I continued listening to the song, I soon found out that parts of the song which deal with the various aspects of slavery could hardly be attributed to or connected to John Lennon’s personal life-span.
Not that there were no attempts made to have the entire song deal with John Lennon only, including the references to slavery. We all know that Lennon grew up in Liverpool. I read somewhere that Dylan may have made these references to slavery because Liverpool was once directly involved in the slave trade and it had been the biggest port for trading slaves for 50 years before abolition in 1807. When you take a walk through the streets of Liverpool you will find that the remnants, which remind you of this ‘golden age’ of slavery, are still visible. Some of the street names – like Hardman Street, Bold Street, Tarleton Street, Blackburne Place etc.  –where given in honor of and to commemorate slave traders.  They even launched a campaign in Liverpool some years ago, to have these street names renamed. Even when the slave trade was finally abolished Liverpool remained the biggest importer of cotton – which is one of the main products of slavery- for many years. I even read that some of the architectural splendor of Liverpool’s city center might have been based on and paid by the financial benefits of slavery. Dylan visited Liverpool many times and it is therefore not at all unlikely that Dylan was aware of this when he wrote this song.
Apart from this, Liverpool was also the assembly point for Irish migration to the USA, in particular after the Irish famine of the 1840s. Conditions on these passages across the Atlantic were said to be so horrible that they were later on compared to the equally dreadful circumstances under which the African slaves were shipped to America, half a century before. When we take Lennon’s Irish heritage into account, the reference to slavery in this song is not at all far-fetched.
But there is more.’ You been cooped up on an island far too long’ is interpreted by some  as a reference to the island of Manhattan, where John Lennon had  lived for more than 5 years- prior to his assassination in 1980 - in some sort of reclusion, ‘cooped up’ in his apartment at the Dakota.
Some people say that the references to slavery in this song allude to the fact that the Beatles had to accommodate their act if they expected to get out of playing places like the Cavern and be accepted by the music industry at large and to make it into the London scene. The line ‘They tied your hands and they clamped your mouth’ is supposed to refer  to the orders the Beatles received from their management not to publicly discuss  hot political and social issues when they came to America; issues  like the war in Vietnam and the Civil Rights Movement in the sixties. In later interviews they made it clear that they resented these orders and restrictions placed on them during their first sequence of tours. By 1965-1966 however, the Beatles took the liberty and had the power to do, and say, whatever they pleased.

Plausible as a comprehensive analysis of the song  - only dealing with John Lennon – may seem, yet there are enough reasons to assume that in the song Dylan deals with more than one ‘John’. Personally I found reasons enough to believe that the other ‘John’ Dylan has in mind in this song, is St John, the Apostle.
First of all, there is a sort of ‘finality’ prominently present on the album ‘Tempest’. ‘The Tempest’ was Shakespeare’s last play (albeit whimsically dismissed by Dylan – in his typically Dylanesque style – because, as he said, the album title is ‘Tempest’ and not ‘The Tempest’). The Book of Revelation – said to be Dylan’s favorite Bible book- is mentioned in the song ‘Tempest’ as the last  book the captain of the Titanic read during the last  dying seconds of his life. The Book of Revelation written by the longest lived of the Apostles, St John, in the last stage of his life, is at the same time also the last book of the Bible.
Furthermore, this song is reminiscent of some sort of medieval dream-vision poem in which the poet enters into some kind of trance at the start of the poem, loses all sense of time, and loses contact with the present world and enters an entirely different, ancient world, a world where the difference between the conscious and the subconscious and the difference between reality and fiction is continuously obliterated. The song starts with ‘Doctor, doctor tell me the time of day’ indicating that the poet has now in fact lost all sense of time and that he is now ready and in a position to sway backwards and forwards between the times and experiences of John Lennon on the one hand, and the ancient times and experiences of St John, cooped up on the isle of Patmos in 95 AD, on the other hand.
But the lyrics are not entirely dealing with John Lennon and St John. There is a third personage and that is the poet himself. This is apparent from the last verse where the object suddenly changes. One would expect the lyrics to read there ‘I pray the Lord his soul to keep’ referring either to the soul of John Lennon or St John, but instead the lyrics read ‘I pray the Lord my soul to keep’. The statement of the writer, Will Hermes, who sees the song as ’a prayer from one great artist to another and a reminder that Dylan now stands virtually alone among his 1960s peers’ takes it too far. True, the song certainly has many elements of a prayer, especially in the refrain, but not a prayer from one artist to another but rather of a prayer to the Lord above. In this prayer the poet expresses on the one hand the turmoil in his soul, not only about the senseless killing of John Lennon, but deep inside also the worries about the whereabouts of Lennon’s soul. It seems as if he now implicitly wrestles with the question: where do I stand among all this, what will happen to me? How will my soul end up? How will posterity look back on me? At the same time he finds great comfort in the other John, the Apostle. Although the sufferings of St John were immense, hard labor in the quarry mines on the isle of Patmos, St John’s light shines on in the book of Revelation and until the end of time. The fire of St Jon’s suffering has gone out out but the Light is never dying, it shines on and on and rolls on and on.

Finally, Ellen Gunderson Traylor wrote a novel in 1970 called ‘John, Son of Thunder’. In Chapter 120 and 121 Gunderson Traylor describes the degrading circumstances under which St John –well over 90 years old - had to work as an exiled slave in the quarry mines on the isle of Patmos, in the year 95 AD.
Although words like: ‘Rags on your back just like any other slave, they tied your hands and they clamped your mouth’ seem to be taken  almost literally from Homer’s ‘The Odyssey’ but words to that same effect are also in Ellen Gunderson Traylor’s novel and it is therefore not at all unlikely that Dylan read this harrowing novel..
In our next article we will delve deeper into the lyrics, in a verse to verse analysis, and we’ll see how we can piece all these things together.  Please comment on this article by clicking on the button ‘reacties’ on the bottom of this page.

In an attempt to assert that Roll On John is about the biblical John , rather than the Beatle to which references are clearly made, requires so much writing on the part of the analyst that the short song is drowned in the flood of the writer's own religious beliefs. It's way over the top.

William Blake, the poet, is a Modern Gnostic of sorts in that the 'Lamb' is easily considered the dual 'light' side of the 'dark ' emanation of the 'Tiger'.

So both John the Apostle, considered by some biblical analysts to also be involved with Revelations, and poet Blake, can be viewed as an influence on Dylan.

It's not clear who wrote the Gospel of St. John, and, in any event, some scholars consider him to be a 'Gnostic' rather than a Christian in thought -that is he thinks of Jesus as an emanation from the Absolute Monad to which he returns, not the 'son' of the orthodox Hebrew God.

That the song is about John Lennon is a path much firmer to tred.

Wow you've made me think. This song has grown on me but has bugged me in trying to deciper it. The way you bring St. John is a revelation.

i disagree with your idea about the lyrics "Doctor Doctor tell me the time of day" This refers to a death, when someone passes the doctor reads out the time of death.

"Another bible's empty and penny spent..."

Pennys over the eyes for passing...etc...

Another interesting entry with much to consider!

"I left town at dawn with Marcel and St. John strong men belittled by doubt" Where Are You Tonight B. Dylan

WOW who is that with Bob in that photo? Amazing photo of Bob!

The stuff about the Ellen Gunderson Traylor novel, and much of your analysis, feels like a stretch, in that at http://pinterest.com/scottwarmuth/a-tempest-commonplace/ it has been shown that, without question, many of the key lines in the song are taken verbatim from The Odyssey. Your analysis is severely lacking by not taking this into account.

Fascinating as always. By the way, you know that the "Doctor, doctor" quote at the beginning of the song is from Lonnie JOHNson. It seems to me that the opening scene could be in the mortuary standing over a "John Doe", an unidentified body, suggesting that this is also a lament for all the Johns, i.e. all of us.

In one word: brilliant!