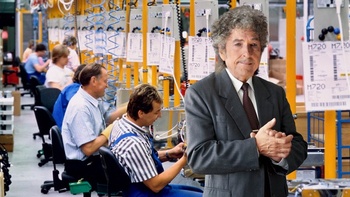 You seem to suggest in the analysis of God On Our Side that God's grace is indeed conditional on one's peaceful intent while in the song it is Dylan who says it should not be ....no wars .... period.

The problem is your accepting the Bible as unified and noncontradictory which requires to a lot of word manipulation to undo, ie dogma.

Dylan accepts the contradictions in most of his songs that deal with spiritual matters - his songs have a lot of two-edged phrasing that suggest one is never quite sure if one is serving the devil or the Lord in as much a one is incapable of comprehending the mysterious mind of God.

At 13 years old, (1966) I was introduced to Dylan at a coffee shop in New Jersey when a folk singer belted out, "A Hard Rain's Gonna Fall". I was mesmorized by the depth of perception and immediately bought his first album. I've been a dire hard fan since.
Unlike many of the fans, critics and public you mention, I did not find Dylan's so called "Christian Phase" an off course route on his highway. He has always been a voice of the human condition & struggles of the soul. Those who were offended by that period are only reflecting their bias and ignorance.

I applaud your writing in this and hope it opens some minds.

Although sometimes I feel you are looking at Dylan's later lyrics too much with an eye on his Christian faith, I think this article she's a good light on the logic of how Dylan's writing evolved from Slow Train Coming to Shot of Love. It makes me apreciate this creative process more.