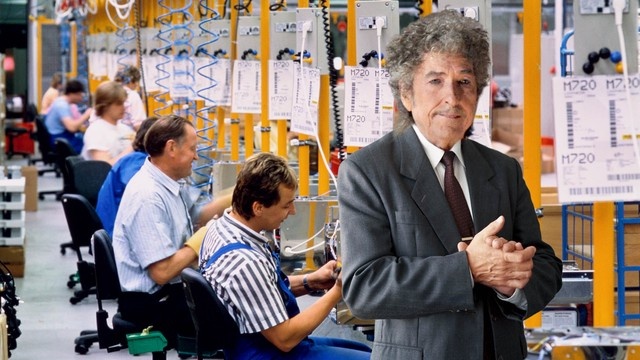 Bob Dylan's "My Own Version of You" - an analysis- Part 1

1. Introduction.
There cannot be any doubt that we deal with yet another Dylan classic here. As time passes by and we draw nearer to the end of his impressive career as a poet, musician, songwriter and painter, his work seems to become more and more intricated.
A key point is that the “You” and the “My” in “My Own Version of You” are not identified. Objectively seen, the “You” may be virtually anybody or anything. This gives rise to a lot of speculation from Dylan scholars on the internet. Some say that the “You” is a woman. Others argue that the “You” is Dylan himself who continuously recreates himself. Again others, suggest that it is just a sneer at all those critics and analysts – including the author of this article- who make their own version of Dylan and pretend that their “version” is the only one that is authentic.

However, what about if we have good reasons to assume that the “You” in this song is supposed to be God? God says in Genesis 1:26: “Let Us make man in Our image, according to Our likeness” (KJV). What about if the “My” represents mankind who tries to be like God? What about if this song has to do with the indelible and irresistible inclination of fallen mankind to be like God and to create a self-made version of God, and in doing so defies God’s first commandment “You shall have no other gods before me” and even more importantly defies His second commandment: “You shall not make yourself a graven image” (Exodes 20:3,4 RSV)?. In other words: “You shall not make an own version of me”?

It is clear that this song is -at least partly-inspired by Mary Shelly’s novel “Frankenstein”. The main character in this novel, Victor Frankenstein succeeds in bringing “someone to life”, but it turns out to be a murderous monster whereas God says of His creation –man made in His own image- that it was quite good (Gen. 1:31).

The idea that the “You” in this song is in fact God, is in line with the main theme of this album: “Rough and rowdy ways”. The rough and rowdy ways are the ways of God’s opponent. “Good intentions can be evil” we hear Dylan say in his song “Man of Peace” and many a time these intentions are hidden under a cloak of decency. The words in this song: “I want to do things for the benefit of all mankind” and “do it with decency and common sense” sound benevolent. But – as is so often the case in Dylan’s songs- things are not what they seem. When mankind is stopped short in its never ending endeavour to make an own version of God, mankind can become extremely violent. When all attempts to create an own version of God fail and mankind “gets into trouble”, one would expect that mankind would give up and surrender. But that has not happened. On the contrary, instead of giving up and surrendering, and admitting that mankind in itself has “No place to turn - no place at all” , mankind does the opposite and “hits the wall”.

No matter how preposterous and futile all these attempts to create an own version of God are, mankind keeps on trying. Take e.g. “Mister Marx with his axe”; his communism. His attempt to create a secular version of the kingdom of God resulted in millions and millions of casualties who- in the 20th century- were slain by this ideological axe under Stalin’s and Mao’s communism. The same can be said of all religious ideologies, during the Crusades and even “Long ago before the First Crusade”. “God wants it” has often been misused as a pretext to create – as Dylan stated elsewhere- a “new imperial empire”, to create an own -secular- version of the kingdom of God which in reality has nothing to do with the heavenly kingdom, on the contrary.(For more details on this, see my analysis of Dylan’s “With God on our side”, elsewhere on this website).

It will appear that this song must be understood against the backdrop of the biblical books of Genesis and the biblical prophets Isaiah, Jeremiah and Ezekiel. These prophets picture in dark colours how futile and ridiculous all attempts to make an own version (image) of God are. The poet sees through it all: “I can see the history of the whole human race, It’s all right there - its carved into your face”. This is confirmed by Jeremiah 51:17,18: “The whole human race is foolish and has no knowledge! The craftsmen are disgraced by the idols they make, for their carefully shaped works are a fraud. These idols have no breath or power. Idols are worthless; they are ridiculous lies! On the day of reckoning they will all be destroyed”(NLT). The song makes it implicitly clear that all attempts “to create an own version of” God will ultimately lead to disaster. Let’s see how this works out in a detailed analysis of this song.

2. Analysis.
When the song starts by saying: “All through the summers and into January, I’ve been visiting morgues and monasteries, looking for the necessary body parts” we are immediately taken to Mary Shelly’s novel “Frankenstein”. In chapter 4 of this novel we see the main character Victor Frankenstein devoting himself to schoolwork, to science and in particular to chemistry. He is quite successful in this area and deserves a lot of esteem from his professors and fellow students. When he leaves Ingolstadt in Germany and returns home to Geneva, he devotes himself to a new field of scientific experiments. He tries to create new life from dead material by reanimating a dead body. To do so he visits morgues and cemeteries, looking for the necessary body parts. After several failed attempts he is finally successful, albeit at the expense of his health and powers of judgement. He continues this grisly work all through the spring, summer and autumn of that year.

Now when it says: “All through the summers and into January” this suggests that the antagonist has allowed himself a considerable amount of time to be well prepared for his creative action. During that time of preparation he says “I’ve been visiting morgues and monasteries”. It seems a little odd that the word “monasteries” is used here where one expect the word “cemeteries”. It is as if the poet deliberately intends to blend the secular “morgues” with the more sacred “monasteries” suggesting that in the end death -without any respect for the sacred - equalizes both the secular and the sacred.
“Looking for the necessary body parts, limbs and livers and brains and hearts” – apart from the Frankenstein connection- these words remind us of the book of the Biblical prophet Ezekiel , where in chapter 37 we find the vision of the valley of the dry bones (to which Dylan also refers to in his song “Dignity”where it says: “I went into the red, went into the black, into the valley of dry bone dreams”). In a vision the prophet Ezekiel hears a rattling noise (37:4) when a vast number human bones come together and he sees “tendons and flesh” appear on the bones, as it were, he can see limbs and livers and brains and hearts etc. take their right position on the corpses (37:8).

“It must be the winter of my discontent” echoes Shakespeare’s play Richard III where it says: “Now is the winter of our discontent made glorious summer by the Sun of York" (Act 1 scene 1). An article from The Shakespeare Birthplace Trust called “Shakespeare’s Richard III - Myth or Reality ?” deals with the question whether the real Richard III was as villainous as Shakespeare made him out to be. The article says: “Well the short answer is no. While Richard was no saint, making a number of misjudgements, and at times showing his ruthless streak, Shakespeare’s representation of Richard is largely inaccurate”. From this article it would seem obvious that Shakespeare – for whatever reason – created his “own version” of Richard III.

In this song the words “It must be the winter of my discontent” shows the antagonist’s ongoing discontent that he has not been able to “bring someone to life”. He has gone through various “summers” and is now again back in winter, in January, and he shows his discontent that he still has not managed to “bring some to life”. He tries to be like God but he lacks the divine secret, the secret how to create something out of nothing, not by“doing” something- but by "saying" something, just at the command of his word. The antagonist  however,keeps on “doing” things throughout this song -albeit in vain- . Man is created and lives by the spoken “word” of God. The antagonist cannot match this and laments “I wish you’d taken me with you wherever you went” as if he said to God: “I wish I would have been there when you laid down the foundations of the earth and created man, so that I could copy it and make my own version”.

In his Wall Street Journal interview 19th December 2022 Dylan said ”I’ve binge watched Coronation Street”. Coronation Street is an English soap opera created by Granada Television and shown on ITV since 9 December 1960. They say that from episode 4672-5877 there is a dialogue which runs: “I'll take the godfather Barlow and the Scarface Sugden, mix them up in a pint, and get a Hilda Ogden”. In word structure this resembles “I’ll take Scarface Pacino and the Godfather Brando mix em up in a tank and get a robot commando”.

In “I’ll take Scarface Pacino and the Godfather Brando”, “Scarface Pacino” refers to the movie ‘Scarface’ from 1983, starring Al Pacino and “ the Godfather Brando” refers to the movie “The Godfather” from 1972, starring Marlon Brando. These movies are all about organized crime, family connections and brutal power. In his attempt to create “an own version” of God, man does not stop short from identifying with- and in a certain way glorifying- downright criminality by taking mafiosi’s as a role model. It must be admitted though, that some of these bandits also show a human face in these movies, especially when they show loyalty to their families.

Although it seems obvious that when you take the Godfather Brando and the Scarface Pacino and “Mix ‘em up in a tank”, that no good will emerge from it, yet one keeps on trying. Evil creates evil, the only natural thing such a mixture can create is “a robot commando”. “A robot commando” who will carry out whatever evil schemes you instruct the robot with. “Robot Commando” is a reference to a gameplay book for a tabletop game from 1986, and also a toy from 1961.

The article is good in that it does not claim to be the definitive interpretation of the song, but a plausible one.

Another interpretation is that Almighty God made humans in His own image, and didn't like what He saw.

Another that the creation of the Universe was coming along just fine until a 'demiurge' intervened in the process, and messed things up.

Goes back to the problem of evil - it's difficult to explain in the face of an all-powerful Creator.

Sounds like you may have been reading my book:A Voice From on High?!?!

All of what you wrote is very good analysis of the song. I think there are aspects of the song that deal with Christ creating a new creation. God wants to create his own new version of us. Perhaps the perspectives of the song are changine from Jesus to man and back again. This would be very much like "Tangled Up in Blue" and other Dylan songs.