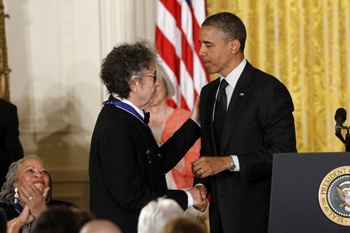 Lyric analysis of Bob Dylan’s “When the night comes falling from the sky’ – Part 3 (final part).

Part 1 and 2 of this analysis were published a few months ago, so if you wish to put things together please first read Part 1 and Part 2 of my analysis. We now continue were we left off last time.

“In your teardrops, I can see my own reflection; luck was with me when I crossed the borderline.  I don't want to be a fool that's starving for affection; I don't want to drown in someone else's wine”. You can see your own reflection in the mirror. Her tears are so big and intense that he can see his own reflection in those tears, like looking into a mirror.  It is really all buckets of tears here. He sees his own reflection also means that he sees his own sorrow and grief, about the situation she is in now, reflected in her tears. ‘Luck was with me when I crossed the borderline’, the Empire Burlesque version has: ‘ It was on the northern border of Texas where I crossed the line’  is a metaphor to show that at a certain point during her lifetime, he was lucky enough to get away from her and to set himself free. On border towns Dylan is said to have said “You feel things and you’re not quite sure what you feel. But it follows your every move.” By crossing the borderline the poet was lucky enough to break away from her physically, yet mentally he is very much attached to her.
“ I don't want to be a fool that's starving for affection” reminds us of the poet Spenser who once said: “Most wretched man, That to affections does the bridle lend”. The Scriptures say that a fool is a person who acts contrary to moral and religious wisdom and who ends up dead. The poet seems to struggle with this misplaced affection, lust which will ultimately lead him to death. He cries out the same warning as in ‘Don’t fall apart on me tonight’: ‘No more decadence and charm, no more affection that’s misplaced girl’.
“ I don't want to drown in someone else's wine” may either mean that he is not willing to fall victim to the delight of others –the satanic powers that urge him to give in to the powers of the flesh –or some vague reference to the blood of Christ. In ‘Tight connection to my Heart’ Dylan wrote ‘Never could learn to drink that blood and call it wine” .In Matthew 26:27 it says: ‘And he (Jesus) took a cup of wine and gave thanks to God for it. He gave it to them and said, “Each of you drink from it, for this is my blood, which confirms the covenant between God and his people”. The meaning here may be that if he gives in to her, the blood of Christ will do him no good. The blood (the wine) which was meant to salvage him will be the cause of his ultimate spiritual death.

“For all eternity I think I will remember that whirlpool of light that's in your eye”.Again, the poet focusses on what will happen in all eternity. In eternity there is a large gulf between the two them which cannot be fixed. Yet it will be a narrow escape from her. Her life – some hear ‘life’ instead of ‘light’ here – is like a whirlpool that sucks all life out of him, just like a black hole in universe absorbs all energy of a galaxy. This whirlpool is like that temptation’s angry flame which tried to drag him into the morals of despair. He did not give in, but it was a narrow escape and for all eternity he will remember the power of force she had on him.
“You will seek me and you'll find me in the wasteland of your mind, when the night comes falling from the sky”. He fears that she will end up in hell. And just like the rich man in hell (Luke 16), in vain reached out to poor Lazarus for help, her attempts to reach out for him will fail. Yes, she will find him, but it will be in ‘the wasteland of her mind’.  A wasteland is an uninhabited wilderness that is worthless for cultivation. She will find him but she will be unable to get into contact with him and reap the fruits of such an encounter, it will all be in vain.
Dylan may have been inspired by T. S. Eliot's poem "The Waste Land" of which the critic Joseph King wrote that it ‘demonstrates a religious sentiment about the increasing lack of restraint in human sexuality. The reader experiences a morose overtone from the title of the poem to its almost nonsensical conclusion as Eliot describes this fantastic yet hauntingly familiar wasteland. The oncoming sexual revolution appeared imminent as a reaction to the repressive Victorian society of the past generations. Eliot sensed the changing world and forged this poem to strike at the heart of this growing trend of immorality."

“Well, I gave to you my heart like buried treasure, but suffering seems to fit you like a glove, I’m so tired of those who use forbidden pleasure, who think they've got a monopoly on love”.
Some hear here: Well I gave to you my heart without bad intention. Since there is no alternate transcription of the song, this may also be possible.
‘A buried treasure’ is usually defined as a surprising piece of code found in some computer program. The expression ‘A buried treasure’ may be used sarcastically, because what is found is anything but a treasure. Anyway, ‘buried treasure’ almost always needs to be dug up and removed. In slang ‘buried treasure’ may denote yet-to-be burnt weed found at the bottom of a deep bowl, usually covered by layers of ash. Furthermore Jesus speaks of a ‘buried treasure in Matthew 13:44: “The kingdom of heaven is like a treasure buried in a field. When a man discovered it, he buried it again”.
Within the context of the song ‘buried treasure’ may mean that in the poet’s heart there is something very precious. This treasure may be faith in God. The treasure is buried deep in his heart, so it is not easy to dig it up but if she would have done her utmost, she would have found it. But she refused to do so and now it is too late, all that remains for her is eternal suffering, a suffering which is all around her and seems to fit her like a glove. Whereas peace, joy and delight fit those who are in heaven like a glove, those who are in hell fit suffering like a glove. Which one will fit you is a matter of choice, a choice you have to make here on earth. It is either one or the other (but one cannot say neither of the two).
“ I’m so tired of those who use forbidden pleasure, who think they've got a monopoly on love”. Some hear Dylan sing: “I'm so tired of those who use you for their own pleasure”, but this seems less appropriate. ‘Forbidden pleasure’ reminds us of the forbidden fruits of paradise. In “TV Talking song” Dylan warns us that watching TV will “Lead you to the land of forbidden fruits”. The forbidden fruits of paradise were a delight to the eyes and very tempting. Eve fell for the temptation of the devil and ate the forbidden fruits and by doing so dragged all mankind into sin. The core of all sin is separating the gift from the Creator of the gift and using the gift for one’s own pleasure, as a stand-alone item. This is exactly what those do who use forbidden pleasure. They have sex without love and without an embedding in a relationship of enduring love, loyalty and companionship, and that is what forbidden pleasure really is all about. Those advocates of forbidden pleasure make matters worse by claiming that this way of practising love is the only way of expressing love, they think they’ve got a monopoly on love, they look down in contempt on those prudish people, who reject free sex and who still connect love and sex. The poet is sick and tired of those advocates of free love and sex and that is why he ends the song with an unequivocal statement.
“Well, this time I'm asking for freedom, freedom from a world which you deny. And you'll give it to me now, I'll take it anyhow, when the night comes falling from the sky. This last verse has the force of an ultimatum; it is full of apocalyptical fire. The song reaches its climax. For him it is a matter of life or death. He does not want to abandon her but at the same time he demands freedom. He demands freedom to serve the Lord. He lives in a quite different world than she does. She constantly refuses to accept the existence of the spiritual world he lives in. He feels he has to make a choice. She must accept the reality of this spiritual world and if not he has to leave her. One thing is clear to him: he will not abandon his faith and if she is not willing to accept that, he must leave her, no matter how painful such a decision is. The bottom line is that if he has to make a choice between her and God, he will chose for God. When the night comes falling from the sky – the Latter Day is on the doorstep –he wants to make a clear statement about his dedication to God, this dedication is straightforward, plain and irrefutable and if he has to give up his beloved for this dedication he will do so, no matter how suffering and agony it will cost.
As always do not hesitate to write a critical comment on this article.

Nikki - Hey, I posted a link to your blog with this post on my faboceok page! You need to get you one of those. Very cool that they published your pics, they are amazing as always. Things are slowing down for us, finally, so dinner soon!